Emerged as a reaction against Impressionism, Post Impressionism is mainly a French art movement that became very popular between the period of 1886 and 1905. This was before the birth of Fauvism. The main concern of Impressionism was a concern for the naturalistic depiction of light and colour. 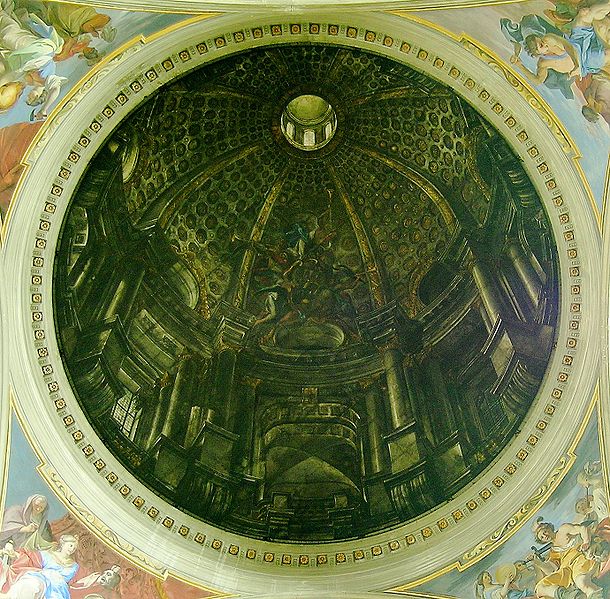 Painted dome in the church of Sant'Ignazio, Rome.

Post Impressionism was an attempt to break free of the naturalism of Impressionism in the late 1880s. The term was coined by the famous British artist and art critic Roger Fry. He used this term for the first time in the year 1910 when he organized an exhibition called 'Manet and the Post Impressionists'.

The new generation of Post-Impressionist artists pushed the ideas of Impressionism into new directions. They picked up the good things from traditional Impressionism while rejecting the things, they thought were limiting their art. Among the things they retained from Impressionism was the use of vivid colours and portraying real-life subjects, but focused on more geometric and distorted forms along with the use of unnatural and ‘random’ colours.

The new age Post-Impressionist painters worked towards creating their own unique and independent artistic styles as a way to express their emotions. This was in stark contrast to the simple optical impressions with special emphasis on themes of deeper symbolism.

These artists were quite dissatisfied with the triviality of the subject matter and the loss of structure and hence experimented with a greater degree of formal order and structure. Though these artists challenged Impressionism, but still focused on the artificiality of the picture. These artists believed that it was possible to render colour distinct from the form and composition as an emotional and aesthetic bearer of meaning.

The movement of Post-Impressionism started in the mid-1800s and till the early years of the 1900s. During this period, different artists picked some aspects of Impressionism and exaggerated them. For instance, Vincent Van Gogh (1853-1890) used bold colours thickly on the canvas to add vibrancy to it. This technique was called 'Impasto'. Due to this technique of expressing emotional qualities through forceful brushstrokes, he is credited with propagating Expressionism. The other major Post-Impressionist artists are Paul Gauguin (1848 -1903) and Paul Cezanne (1839-1906).

The famous English artist and art critic Roger Fry was the first person to use the term ‘Post-Impressionism’. The term was first used by him in the year 1906 and again in the year 1910 during an exhibition organized by him. The exhibition titled Manet and the Post-Impressionists is treated as a milestone in the history of art because it signalled the development of French art.

Post Impressionism broadly emphasizes more abstract qualities and symbolic meaning. Due to this, it encompasses various sub-movements such as Neo-Impressionism, Symbolism, Cloisonnism, and Synthetism. Given below is a list of artists and their major works, which will help us understand the progress of Post-Impressionism, and learn how this movement has evolved.

Owing to the great work done by him, the great French painter Paul Cezanne is regarded as the ‘Father of Post-Impressionism’. His work helped the art by restoring a sense of order and structure to painting. He achieved this feat by reducing objects to their most basic shapes while retaining the saturated colours of Impressionism. Repetitive and exploratory brushstrokes were typical of Cézanne’s style and by using planes of colour he was able to build complex fields and detailed studies of his subjects.

Another famous and influential figure in the field of Western art and Post Impressionism is Dutch painter Vincent van Gogh. The artist is known to have created several paintings of rural life and nature. He believed that some great power existed behind nature and through his paintings; he attempted to capture that magic in his art. It was this belief that helped him bring aspects of Symbolism into his paintings. The Starry Night, created between the period of 1885 and 1890, remains one of his greatest works, and the one he is most remembered for. In all of these works, the artist has made us of vibrant colour palette and purposeful brushstrokes to create inventive perspectives and interesting compositions, all of which reflect his vision.

One more artist, who remained unappreciated until his death, but is now respected a lot, was the French artist Paul Gauguin. He is now remembered for his experimentation with colours and Synthetic style that became a feature of some Post-Impressionist works. The Synthetic style of art aims to “synthesize” (or combine) three aspects - the outward appearance of natural forms, the artist’s feelings about their subject, and the purity of the aesthetic considerations of line, colour, and form.

One of his favourite works was ‘Arearea’, which portrayed two women seated along with a dog, standing beside them. Initially, his work was seen with a lot of sarcasm, though, personally, Gauguin regarded it as one of his finest artworks.

Another painter well known for his innovation in the separation of colours into individual dots or patches which interact optically is the French painter and draftsman Georges-Pierre Seurat. He invented the technique of Pointillism – a technique in which small, distinct coloured dots are applied which form a pattern which patterns to form an image.

His most famous work was a large-scale work titled A Sunday Afternoon on the Island of La Grande Jatte is believed as the initiator of Neo-Impressionism. This style adopts a more scientific approach to capture light and colour.

After the death of Seurat, another artist who had assisted him in developing the pointillist style Paul Signac took over the development of Neo-Impressionism. The main focus of his art was on creating landscape paintings and seascapes in vivid bright colours. Just like his senior artist Seurat, Signac also used colour to elicit an emotional reaction from the viewer. Besides, he experimented a great deal with various media including oil, watercolour, etchings, and lithographs.

In his most famous painting, titled, ‘The Bonaventure Pine’, the artist uses the pointillist style to create depth and light within the leaves of the tree and the rolling hills behind.

The art movement of Post-Impressionism involves various artists, each with a distinct style of his own. But they all have a common thread binding them, and that common thread is a motivation to respond to the opticality of Impressionism. The movement has taken birth and grown during an era when painting evolved from traditionally being a window into the world to become a window into the artist's mind and soul.