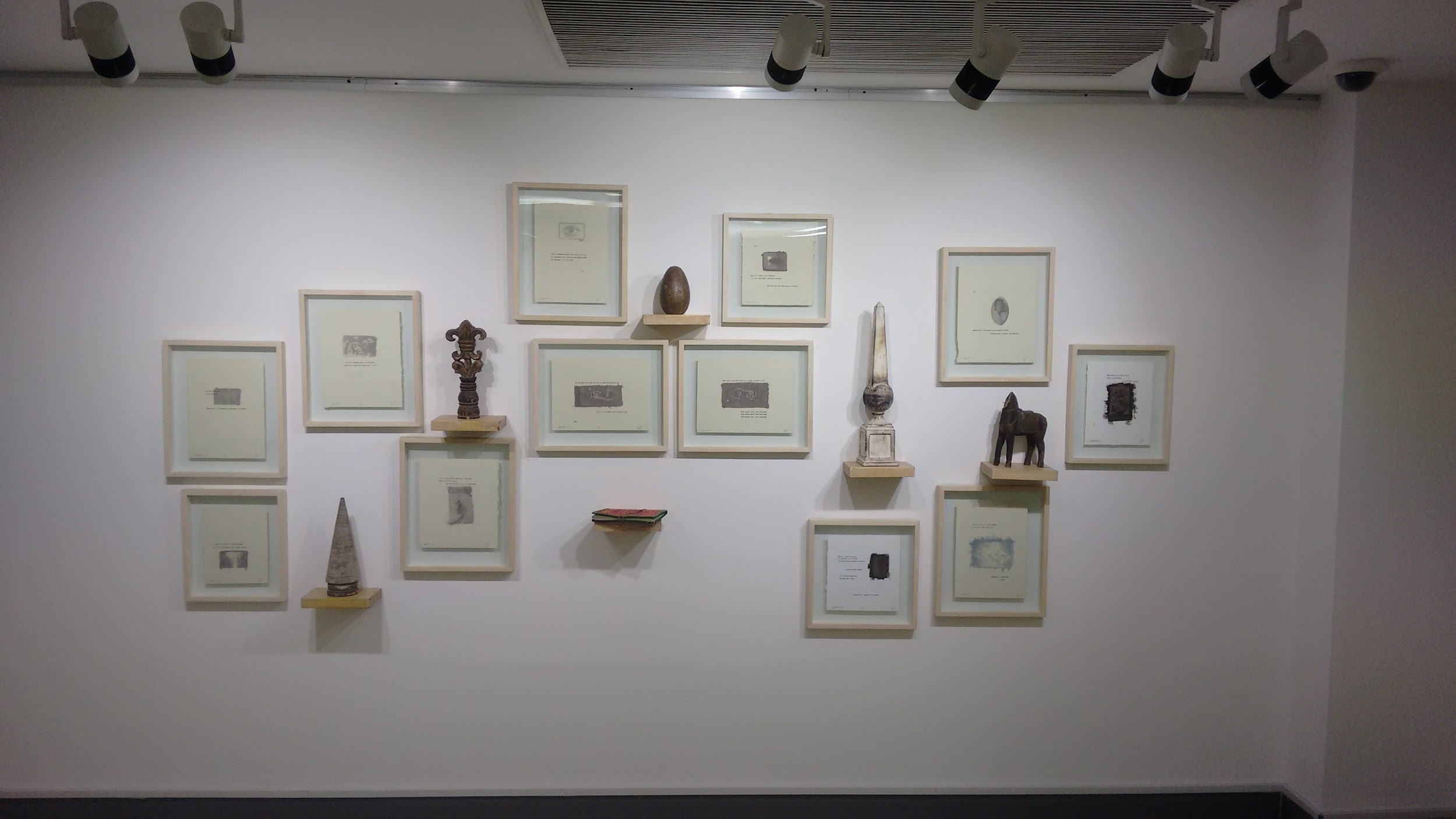 Aditi Nagrath & B.Ajay Sharma, This End to That

In that sense, one can take the exhibition as a move to facilitate space for unconventional narratives that challenge the normativity of society. Although on the face of it Korea and India are very different societies, a further investigation reveals many similarities. Both nations experienced colonialism, achieved independence soon after the Second World War and underwent partition soon after – with the division of the Indian subcontinent into India and Pakistan in 1947 and the split between North and South Korea in 1945. After independence, South Korea witnessed unprecedented economic growth, to become the fourth largest economy in the world. This show can be viewed as a collaboration between Indian and Korean artists to examine the particularities of the respective societies through issues like gender, identity, subjectivity and race, among others. A refreshing perspective at this juncture would be to juxtapose this exhibition with the idea of Asian art.

Critics agree that the term ‘Asian art’ is difficult to define, because it denotes an attempt to unify the diverse art practices within Asia under one signifier. Rustom Bharucha, writing in ‘InFlux: Contemporary Art in Asia’, debunks the very category of Asian art, claiming that Asiacentricity is just another dimension of Eurocentricity. Bharucha further posits that the centuries of shared history and civilizational crisis that Asia witnessed must be looked at not as a burden to overthrow, but as history itself. It seems a futile exercise to try to locate the authentically Asian in Asian art. The broadening of the Asian market in the 80s and the 90s has led to a post-globalization scenario which has facilitated the emergence of centres of political and cultural power localized in Asia. It is through a collaborative practice and an effort to share culture that a move towards a new, pan-Asian language of art can be made.

Trans locates feminism as an entry point into the discourse of alternative perspectives. The role of women in a patriarchal society is, as a consequence, always defined in relation to the man. Korean artist Bokyung Jun questions this fixed role using the metaphor of a school of fish – a traditional Korean symbol of fertility and fecundity in her video work Silk Fish Woman. Rakhi Peswani’s Reinforcement for the Displaced (i-vi) is an installation that employs curtains of polyester taffeta which quote phrases from authors like Frantz Fanon, Susan Sontag and Adrienne Rich, which questions the emotional losses that are experienced by the itinerant migrant. The text is rendered on the cloth by either singeing it, or using safety pins and embroidery, slow painful processes that produce metaphors of loss, absence and fragility. Siren Eun-Young Jung offers a series of really interesting works, that not only attempt to critique the false binaries in terms of gender that society promotes, but also gives an insight into documentation as an artistic strategy. Her subject revolves around the Yeosung gukgeuk – a Korean musical theatre where women perform the roles of both genders. The artist finds and documents legendary actresses of this art form, some of whom often identify themselves as male characters on stage as well as off. She uses video to document one such actress as she rehearses for a male role. She also collects old photographs where the actresses masquerade as a man in real life situations, blurring the line between gender representation and reality. 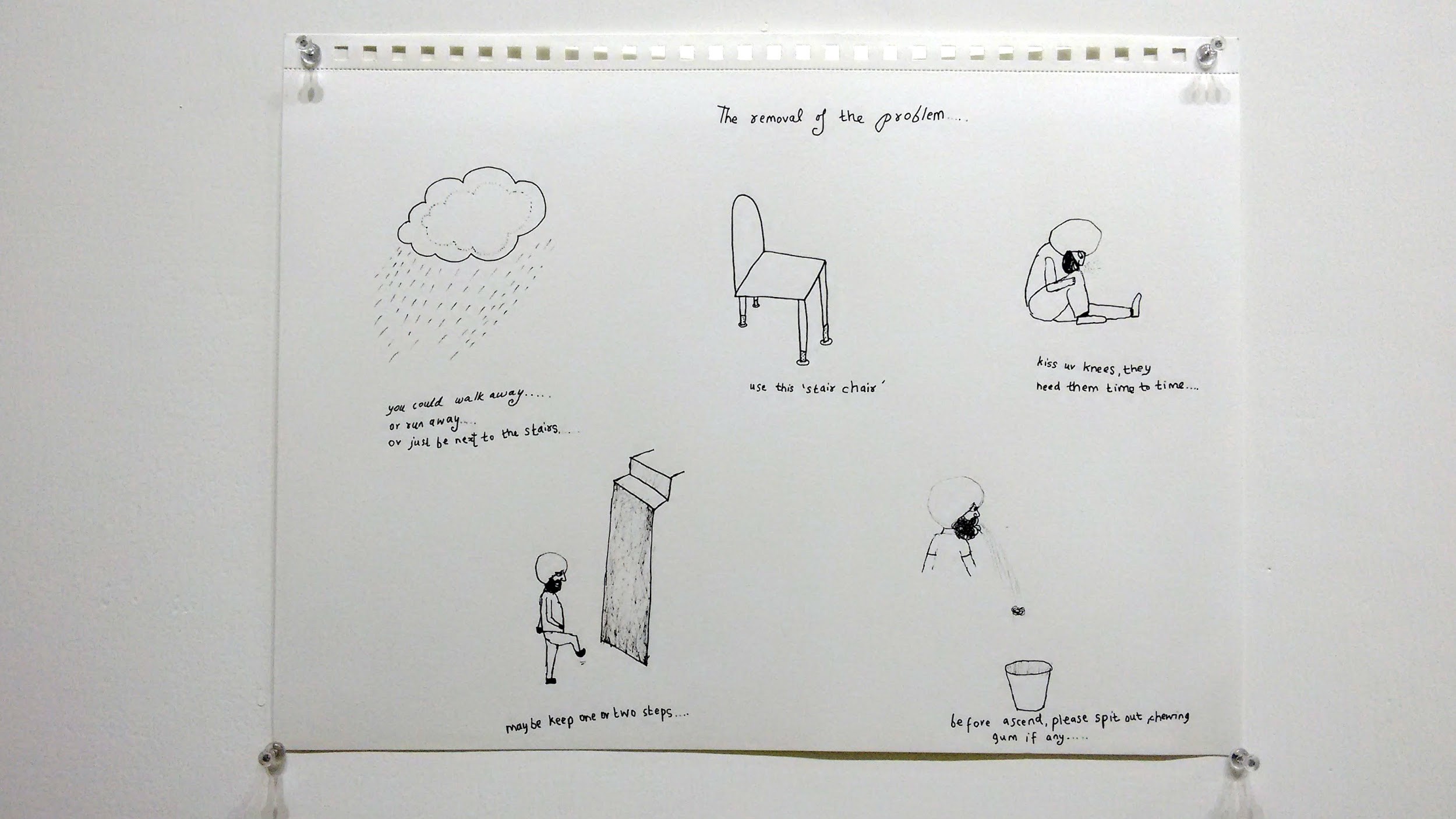 Gagan Singh, The Problem with Stairs, Part of Installation

Gagan Singh exhibits a really interesting work titled The Problem with Stairs. By showing drawings on paper, and sometimes drawing directly on a wall right next to a staircase in the gallery, Singh tries to describe his problem with stairs. For Singh, the main problem with the staircase is a problem of conformity. There is something rigid in the identity of the staircase and in how we negotiate with it. Singh is astute in recognizing this fact and his intervention is subtle, funny and thought provoking. His drawings demand to be explored, induce one to move closer and investigate. One has to be on a lookout with this work, because it is easy to miss a few of his tiny drawings on the wall. In a way, that is the most compelling part about the work. 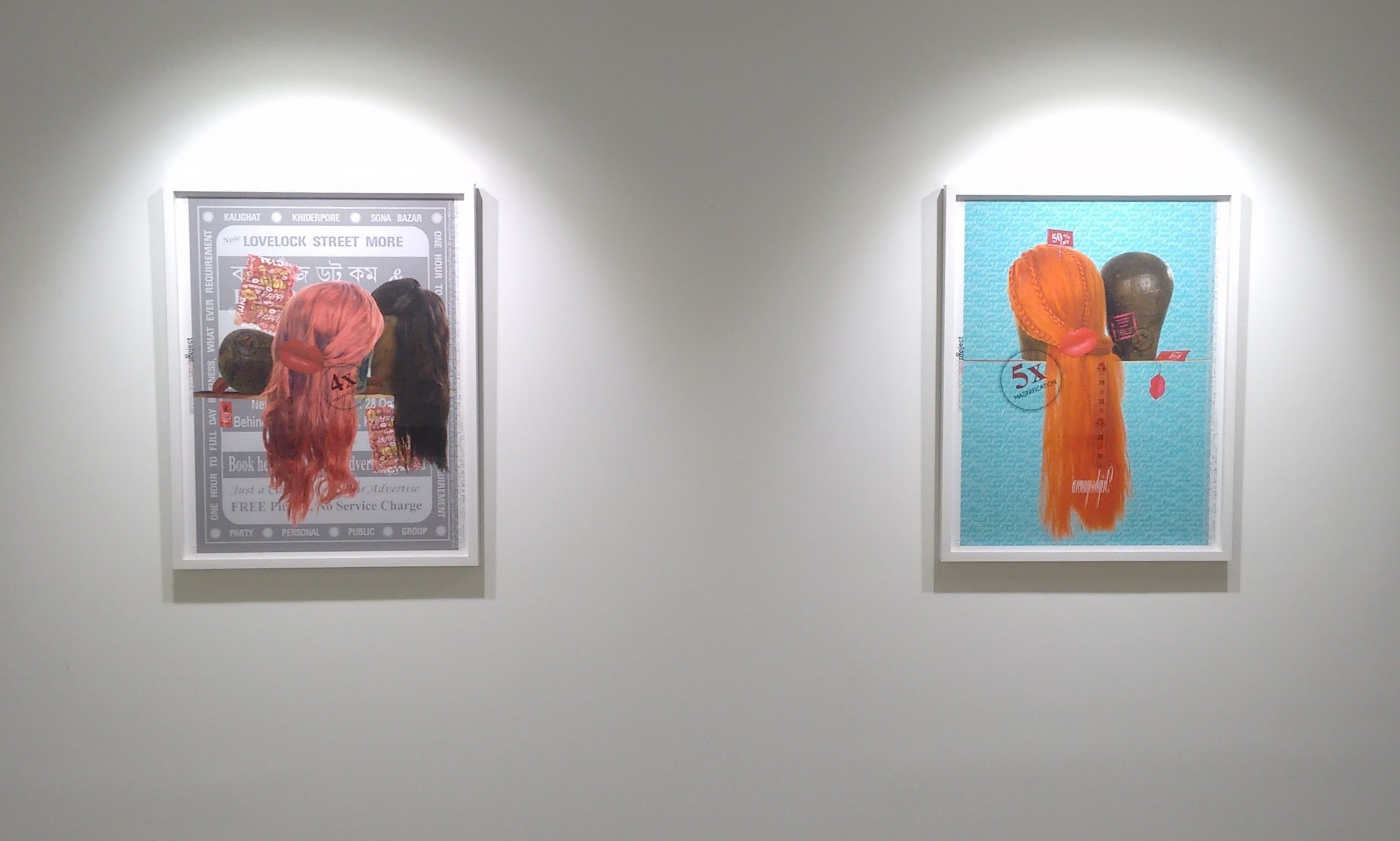 Leena Kejriwal is an activist, photographer and an artist based in Kolkata, who is exhibiting two digital prints titled Hidden from plain sight 1 & 2. These are a part of a larger project that she is currently working on, which tries to raise awareness about the millions of young girls who are subjected to prostitution and sex trafficking in India. Vandana K., a documentary filmmaker offers a short film called Kiki. Kiki is the story of an eponymous girl from Czech Republic who is infatuated with India, while never having set foot in it. While living with her family in Prague, Kiki wears sarees, loves dancing to Bollywood songs, learns Bharatnatyam and dates an Indian boy, much to their consternation. It is a modest film – it show much apart from Kiki’s daily life, but it manages to touch upon the ironies of identity in today’s globalised transnationalism in a brilliant manner. The exhibition also showcases two screenings – ‘Cattle Respect Programme India by Animals’ Angels’ and ‘The Superior Human by Samuel MacAnallen.’ The intention is to question the category of ‘man’, as opposed to animal, or the environment. We live in a society that comes with a dominant narrative about the man, as someone superior to the woman, or the animal, or even technology. It is also important to understand that in the case of India as in most other countries, this narrative is not a thing of the past, but something that is being constantly reinvented every day to maintain a social, political and cultural hegemony. What Althusser calls Ideological State Apparatus is operative in today’s society in the sense that it makes the subject – it affects the very structure of our thought, creates false binaries, and in that sense, governs us. To question ideology is to question the self, first and foremost – to deconstruct one’s own subjectivity.

Narae Jin explores the performativity of identity through her work Trans-Drama, where 6 people are asked to become a non-living thing or a machine, and the performance is documented. Her aim is to interpret the idea of ‘becoming’ – of becoming a person, a subject of society, an actor in a performance and a community itself. Collaborating with Jeonghoon Lee and Myungseok Chae, Narae Jin also exhibits an installation called The Charter Rights of Robo Sapiens. In this work, the artists imagine a constitution for Cyborgs, reminiscent of Asimov’s famous Three Laws of Robotics. A constitution is a document that embodies the state, in the sense that it establishes the fundamental principles or precedents with which the body of the state – the subjects – would be governed. Looked at from this point of view, a constitution for Cyborgs seems like a radical idea, because it implies a community of robots operating within and along with a community of humans – a subject that has been dealt with extensively in Sci-fi. Still, with articles such as – ‘All Robots shall have the right to update its intelligence, electronic records and mechanical tissue’, the work foreshadows a complicated future, all the while not missing the humour in the situation. Gagan Singh, The Problem with Stairs and Siren Eun-Young Jung, (Off) Stage/Master Class

It is refreshing to see  the alternative perspectives that the show offers irrespective of dominant ideology. With every work, the exhibition stresses on the fact that the only way to deal with the question of identity is by contemplation and awareness of one’s own condition.

The exhibition was held at the Korean Cultural Centre India, New Delhi, and was open till the 18th March, 2016.