“Mediums” in art, or putting it more correctly from a grammatical perspective, media in art refers essentially to the material or substance used by an artist in his or her creation. Accordingly, one may encounter phrases describing myriad pieces of art in terms such as ‘Gouache on paper’; ‘Tempera on board’; ‘Oil on canvas’; ‘Ink on bamboo’, and so on. 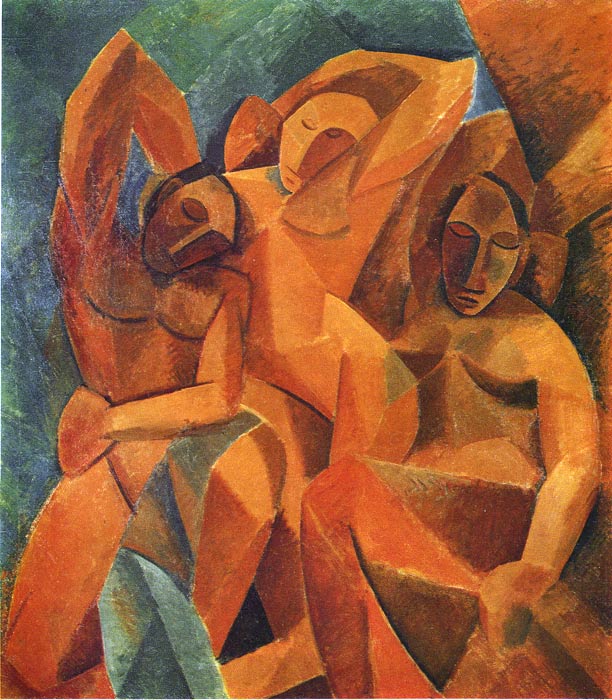 It is pertinent to note that modern artists ranging from Pablo Picasso and Marcel Duchamp onward have established that art can be created of absolutely any material and thus, anything even waste material, bodily excretions and recycled goods have been used as a medium for expression of artistic creativity. Artists even deploy their own body as a medium to create unusual pieces, thereby breaching the meaning of the term medium, as in they are actually acting as the medium in such cases!

Abstract expressionist Jackson Pollock is well known for large ‘drip paintings’ that are made by pouring, dripping and flicking household enamel paint directly onto canvases tacked to his studio floor, using sticks, trowels and painting knives. The brightly coloured food dye from M&Ms has been used as a painting medium in this example, with the chocolate candy photographed in place (photography is a good option when using mediums that might erode or decay over time).

The result of artists indulging in experimentation with different materials and substances to embellish their creations, both paintings and installations, including sculptures has led to a holistic expansion of media, in the sense of materials and has led to new media in an all-encompassing sense of art. To explain, assemblage, installation and performance are all three-dimensional art forms which are unique in themselves and break away from traditional sculpture to be ordained as new media.

Commencing from what is the commonest notion of art that is a painting, this ancient discipline of deploys the base and the paint. The former carrying the work could be of masonite, wood, paper or cardboard, but is most frequently made of canvas. The latter, paints, include oil, watercolor, gouache (an egg-based pigment) and encaustic (wax mixed with color). One may encounter the use of myriad types of paints in some creations as typical types of paint tend to suit different bases. So, watercolor is more compliant on paper, owing to its absorbent properties while oil painting are done on canvas, owing to its strength and ability to support larger works without creasing or tearing. While oil paintings are most traditional and perhaps one of the oldest methods deployed by master artists, as time progressed, acrylic has become widely accepted by collectors of 20th-century paintings and contemporary artists. The tradition of Tempera painting dates back to the Renaissance period of the 1400s when it was tried on wooden panels and board and eventually on canvas and linen supports. It was only in the 16th century that oil paintings were created. ‘Waterlilies’ by Monet is a classic example of oil on paper J.M.W. Turner’s, Venice Looking East from the Guidecca, Sunrise, 1819 is a classic watercolour

Moving on, sculptures are the next most common art works that a layman can relate to. Sculpture is any artwork in three dimensions, and can be constructed with virtually any material such as marble, plaster, clay, steel, bronze, soapstone and wood. Some sculptures are carved or chiseled whilst many are poured into a mould to solidify, such as bronze. Many are built with welded steel, moulded in clay or tooled painstakingly on different stones like jade or ivory and whalebone, as well as precious metals. At present, what one encounters is Mixed Media being used extensively by contemporary artists which involves, as the term suggests, a use of myriad medium. Basically, the artist unleashes his or her creativity based on the use of multiple media and are not bound by any rules or conventions. So, a piece may feature traditional materials such as oil paint, wood or marble, or even digital imagery, electrical components, grass, piles of old books, broken bricks or garbage. Moreover, mixed media work encompasses elements of both, a two-dimensional painting or a three-dimensional sculpture together and hence cannot be defined easily. Art in multimedia goes beyond the scope of mixed media and encompasses visual art with non-visual elements (such as recorded video and audio clips) or with elements of the other arts (such as literature, drama, dance, motion graphics, music, or interactivity). A hugely talented artist with proficiency in multiple arts is only able to justify the choice of myriad layers in his or her work, be it the use of different types of paints on a canvas or different media in an installation or sculpture, which eventually need to be integrated in order to create a spectacular whole!