Gautam Buddha had one said that “There is no fire like passion…” and it is this passion or fire in the belly that keeps artist motivated to create. However, fire can be both constructive and destructive an this blog features some “fiery” events associated with art from around the world. On 4 September 2016, a wooden replica representing London in 1666 was set aflame on the banks of the River Thames to commemorate the 350th anniversary of the ‘Great Fire of London’. Designed by American “burn” artist David Best, the 120 metre long installation recreated 17th century London skyline reminded onlookers of the inferno that destroyed homes, businesses and iconic structures such as St Paul’s Cathedral, lasting for four days and causing much havoc and devastation in its wake.. 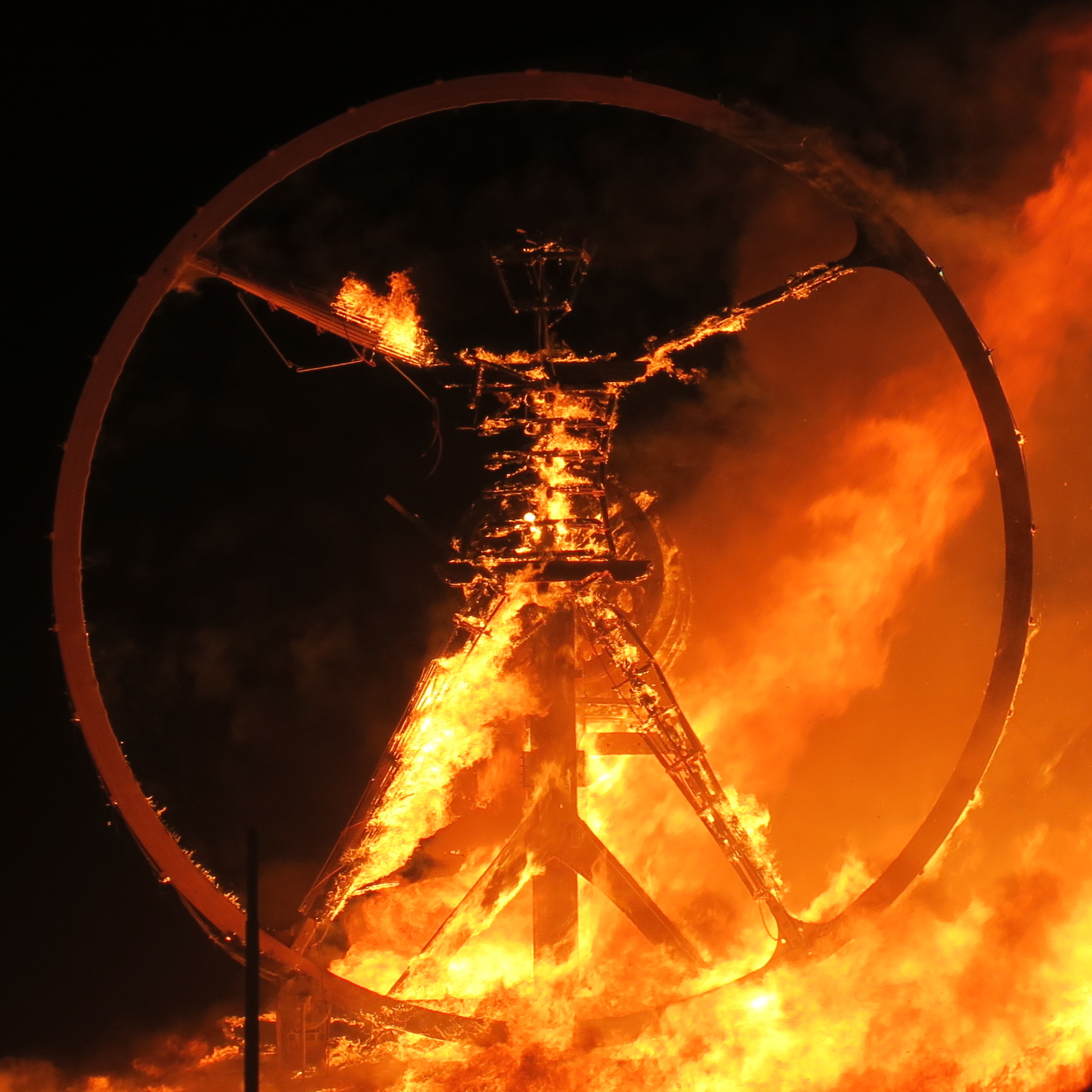 The annual  Burning Man initiated as a bonfire ritual on the summer solstice in 1986 when Larry Harvey, Jerry James, and a few friends burned a 9-feet tall wooden man as well as a smaller wooden dog met on Baker Beach in San Francisco. Harvey, founder of the Burning Man has stated that burning these effigies was a spontaneous act of “radical self-expression.” And every year, at Black Rock City, a temporary community erected in the Black Rock Desert in Nevada, the latest edition of Burning Man 2016 was held between 28 August and 5 September 2016.

Highlights of this festival are the crazy “out-pourings of creativity”, which can  feature experimental and interactive sculpture, building, performance, and art cars among other mediums, often inspired by the annual theme.

Burning Man 2016 was themed upon the 15th century “Italian polymath” Leonardo da Vinci’s Workshop, and paid a tribute to the artist and his team, particularly his most distinguished pen and ink drawing called “The Vitruvian Man.” This artwork depicts a nude man in two superimposed positions, inscribed in a circle and a square. Da Vinci was inspired by the work of an architect named Vitruvius and designed the perfect man as an ideal representation of the human anatomy.

With more than 70,000 visitors and over 300 artists, the festival was characterized with its usual fun, frenzy and fantastic art on display. Some of these were: ‘FLOCONS’ was a a vibrant and colourful display of ornamental structures for a garden display. According to artist Anna-Gaelle Lucy Marshall and Dusty Visions of Portland, Oregon, “We believe in the positive impact of community-driven participatory art projects and seek to support the creation of pieces that can involve a wide variety of individuals and groups from concept to completion. ‘FLOCONS’ was designed as a dynamic and evolving series; the metal hangers providing a blank canvas for endless creative expression in a unique format that is transportation-friendly, allowing for multiple displays year-round.” ‘Mechan 9’ depicted a  huge robot lying half-buried in the ground. And to discover how he got there, a decoder sticker was placed in a hatch on his head, which led to further clues that led onlookers onto a treasure hunt like path of discovery of ‘Mechan 9’. Creator Tyler Fuqua of Oregon said, “Burning Man is about discovery. Discovery of one’s self, discovery of new people, and discovery of amazing art. ‘Mechan 9’ captures that spirit by inviting people to decode a strange text and discover the mystery of the giant robot. Who knows what else you will discover on your adventure to unravel the secrets of ‘Mechan 9’!” Conceived and designed by Heliotropics  from Santa Cruz, California, and Aachen, Germany, ‘Electric Renaissance’ celebrated the advent of the zero-emissions, all-electric vehicles of the future and was an ode to the Cadillac Ranch. According to the artists, “In keeping with the Leonardo da Vinci theme of the Burning Man Festival this year, ‘Electric Renaissance’ also celebrates human ingenuity in developing technological solutions to societal and environmental challenges. While the original concept of the installation was to use actual electric-vehicle bodies, buried trunk down in the playa, that proved both financially and technically very difficult to negotiate (due in part to the fragility of the playa). So, like most art at Burning Man, ‘Electric Renaissance’ will be made of flammable materials and destined to end in a blaze of glory (unless someone spares it that fate).” Transporting audiences at Burning Man to the 1940s, “The ‘Dust City Diner’ was complete with a quilted stainless steel backsplash, red leather stools, a gurgling coffee maker, the Ink Spots and the Andrews Sisters on the radio, and the iconic blue plate specials. David Cole and Michael Brown (Oakland, California) the artists, opined that “We love the idea of a gift economy, and what would be more appreciated than a classic grilled cheese sandwich and a piping cup of strong coffee in the middle of the night? The idea began as we reflected upon the strange experience of being surrounded by people and activity at Burning Man, but still feeling somewhat isolated and not connecting with those around us. The project was to create an intimate oasis for an evolving cast of strangers who, for as long as they occupy a chair, are the ‘regulars’ who give character to all diners across the expanse of America. The special appeal of building something that one just stumbles upon and perhaps never finds again is one of the things that is most particular to Burning Man.” Yelena Filipchuk & Serge Beaulieu from San Francisco, California represents, “A series of geometric sculptures based on Leonardo da Vinci’s drawings that play with your sense of perspective and warp your perception of the inner and outer dimensions of the self. Our work seeks to capture the spirit of wonder, larger-than-life installation, and the curiosity of geometric, out-of-the-box thinking. Building and creativity are the lifeblood of the Burning Man community and we hope to make honest artwork that invites people to think about construction and design,” the artists added. Michael Gard from San Francisco, California, describes his installation as: “My project is wire figures created in aluminum with internal LED lights. These will be flown around the playa at night under large black helium balloons. One of the finest of many spirits Burning Man represents to me is wonder. This project is pretty mysterious from even 50 feet. The night sky really hides the balloons, giving the impression of mysterious floating, dancing forms. Coming closer, people figure it out, but then dig the ingenuity. It’s fun to interact with people after being approached with that level of novelty.” Ryan S. Ballard’s (New Orleans, Louisiana) ‘MechaGator’ is described as “A 12-foot-tall fire-breathing robot alligator puppet controlled with levers and foot pedals that you operate by mounting her little pink pony saddle on her tail. She has disco balls, little pink wings and a unicorn horn. And she has a serious appetite for propane.’MechaGator’ captures the spirit of Burning Man in her flaming interactive whimsy. She brings joy to everyone who encounters her.” Kirsten Berg from Berkeley, California describes his creation in the following words: “Blue-mirror-steel butterflies hover 17 feet over the desert, wings lifted as if just alighted, yet ready for takeoff. Stepping beneath the delicately-perforated, arching wingspan, vivid blue light scatters, encircling us in a vaulted, luminous space of geometric patterns/reflections. ‘Imago’ holds a space, in structure and feeling that is light and uplifting, like an intimate temple or futuristic shrine. [The] design was specifically inspired by the arching, peaked roof shapes of Buddhist temples and ‘spirit houses’ found in Thailand, where I live part of the year, and the blue iridescence of Morpho butterflies. With ‘Imago,’ I wanted to bring the static, geometric forms of the temples together with the organic living form of the butterfly, all to create a space to immerse and reflect in light. The elevated butterflies are easily resonant metaphors for the transformative experiences that compel so many migrations to Burning Man: immersion into a place of imagination, to be renewed, transformed. Butterfly metamorphosis mirrors our playa experiences: intense preparations, followed by the suspension of mundane life, to immerse into a dreamlike space that is safe yet undefined, full of potential. When the time of cocooning is over, we emerge, high on imagination. Just as the mature butterfly, known as an imago, returns to the wider world, ripe for creation and pollination.” Pink Intruder’s Miguel Arraiz and David Moreno of Valencia, Spain, stated that the, “Renaixement (Renaissance) at Burning Man 2016 deployed a contemporary language in its external appearance but also express the essence of Valencian culture and the Fallas tradition. With this year’s Burning Man theme and [Leonardo’s] connection with the Borgia family and Valencia’s Silk Exchange Market building, a contemporary architectonic cardboard pavilion was built on the playa. A cardboard tube structure of over 50,000 pieces, the mosaic ground floor mixed with traditional Fallas Festival cardboard sculptures depicted the traditional way of working in our city, Valencia, Spain.”