Ranjani Shettar’s Between Sky and Earth encapsulates the essence of a space within the artist’s subconsious where thoughts and ideas formulate.  Carved entirely out of wood, Shettar’s work seems set to Michelangelo’s prophetic words, “Every block of stone has a statue inside it and it is the task of the sculptor to discover it.” Her half emerged shapes and half submerged images are wide enough in their scope (and title) to be variously interpreted by its onlookers; however, her sculptures succinctly depict the author’s mood and imagination via the artwork.

Her ongoing show at Talwar Gallery, is an artist’s subconscious brought to fruition on a material which would hardly be considered pliable for such purposes – wood. Yet this is the very reason that gives an unusual quality to her installations, as the material transcends its nature to appear malleable, even weightless. For Between Sky and Earth, Ranjani has used three kinds of organic wood which are rose, teak and walnut wood. While working purely with wood, Ranjani makes sure that the wood retains the natural quality of its grain, and often through its polished texture fissures and faults in its surface give it the natural organic depth which would not have been possible otherwise. All five works in the show while different in appearance are brought together by their seeming closeness to the artist’s subconscious.

For instance, in Remanence from Last Night’s Dream, resin made with brightly coloured lacquered wooden beads seems to ooze out, a Kannada technique among local artisans that Ranjani frequently uses in her own work. While the artwork instantly gives us a vision of a tropical forest, with its colors and its structure, as well as the intonations of the wood, it seems born beyond the forest into a subliminal world of ideas that are still half-formed in abstraction. 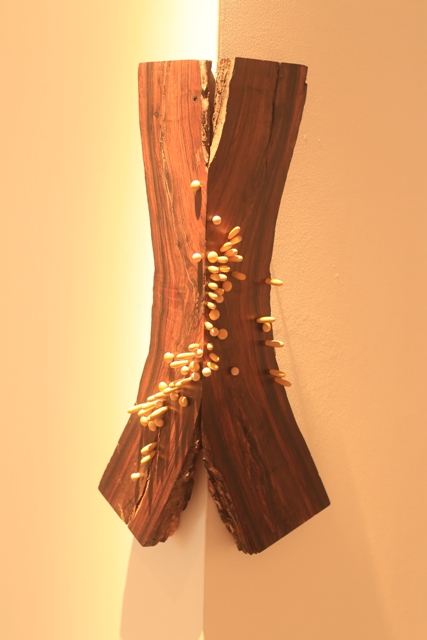 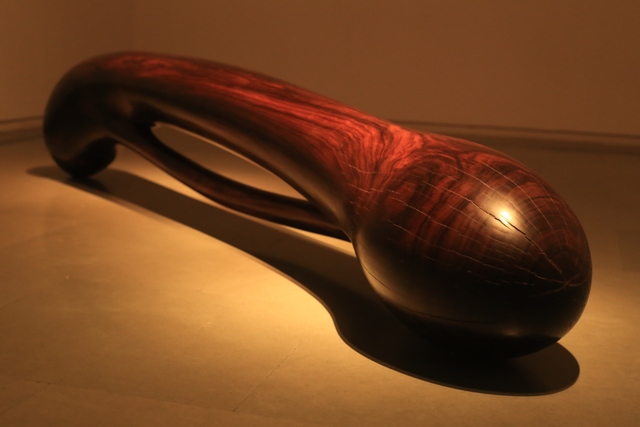 A defining feature of all the artworks is their formlessness. Between Sky and Earth has five sculptures, and lacquered installations, and while all take inspiration from natural form, they are complicated beyond a recognizable compartmentalized (in our heads) structure and represent the birth of form. Ranjani’s artworks are like the Furnham shape and colour test, and urges it’s viewers to determine it’s context derived from their own perception and experience. In that sense, her works in Between Sky and Earth may be called truly post-modern.

Apart from playing with formlessness, the environment features as a recurrent theme in Shettar’s works. Speaking about her choice of material to Time Out Delhi, Ranjani said,

“I had a book of fairytales that had simple illustrations where the grains of the woodcut were very apparent. I was drawn to that texture as a child and, subliminally, I found that I was attracted to wood – its grain, its individual quality. I have worked with teak, rose and walnut wood… they all have individual qualities. I liked teakwood because it has an aura of age to it. I have worked with reclaimed wood from beams of old houses. For sculptures that are very intricate, I like to work with walnut wood because it is pliable; easy to bend. I love rosewood because of the colour and the scent. Yes, making and viewing the sculptures is a kind of immersive experience that involves all the senses.” 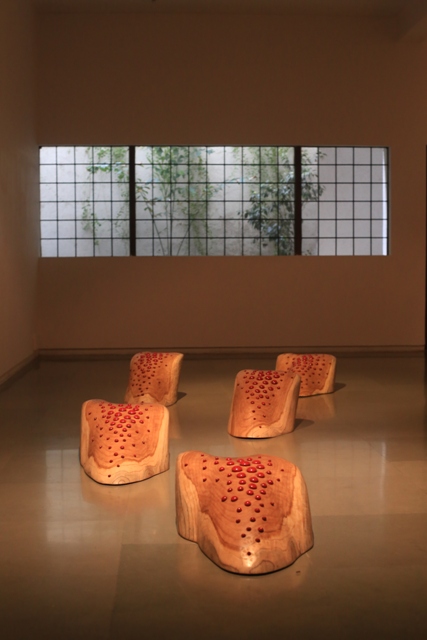 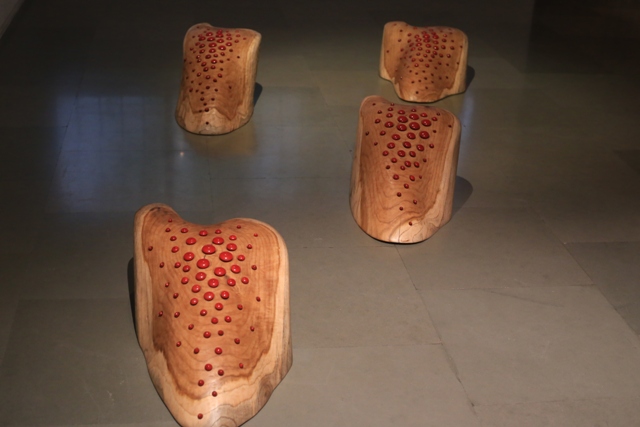 The tactile sense comes across in works such as taut, consisting of thirteen bent walnut wood shapes aligned one on top of the other on the wall. Walnut wood is traditionally not pliable and easy to bend, and therefore each element of the artwork has been designed so it acquires that seeming malleability. Her masterpiece is made of teak wood, and consists of carved wood hanging from the air to give the impression of weightlessness.

The solo show took two years for Ranjani to assemble since she prefers working on each piece herself with minimal help from assistants. She feels that even an inch’s difference will make vast changes to the purport of the artwork, and therefore her vision is completely translated on her own onto the wood, apart from some preliminary assistance in paring the wood in preparation for sculpture, or carrying it to her studio. While her work does not consciously go back to her upbringing in a peaceful old town close to nature and among local artisans, her usage of local techniques and craft materials, gives them an identity intrinsic to her roots. It is not a forced effort on her part; it builds organically out of her deep association with the place she grew up in. 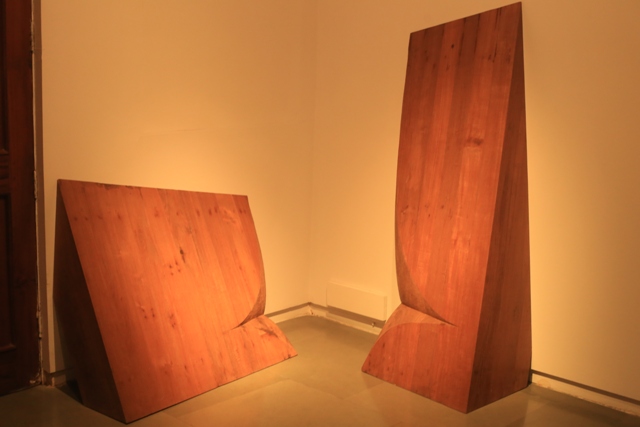 To conclude, one can say that Shettar’s ability to constantly surprise the viewer by re-adapting natural materials is essential to her art. The artist’s triumph is in conceiving works that are refreshing for their ingenuity, artistry, and dedication to the natural world.

Image Courtesy: The writer. Between Sky and Earth was held till 23rd August at Talwar Gallery in Neeti Bagh, New Delhi.